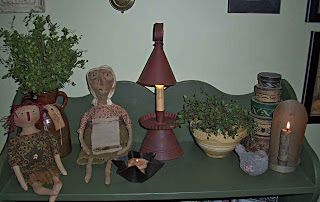 Well since last time I posted a picture of the bottom part of my crock bench, I thought I'd post the top part this time since I have have just redecorated it for summertime. The greenery in the vase are Angel Vine Stems that I sell in my web shoppe. I also sell the Potted Angel Vine you see there, I have it setting in a Yellowware bowl. The Grubby Little Bird, the Tall Tin Candle Holder, and the Black Star Votive Pan are also available. The other things I have had for quite some time. You can click on the picture to make it bigger if you want to get a better look. Have a great weekend everyone!
Posted by Janet - underthewillow at 4:23 PM 11 comments 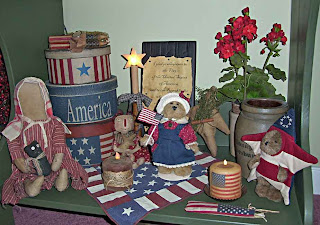 I just wanted to wish everyone an enjoyable Memorial Day....I have been decorating over the weekend and wanted to share my Patriotic display I put together on the bottom of my crock bench....have a great day!
Posted by Janet - underthewillow at 10:11 AM 8 comments

Is anyone else having a problem opening certain blogs with Internet Explorer as their browser?....some open fine but some won't open and I get an error message....just hoping I'm not the only one!
Posted by Janet - underthewillow at 4:58 PM 16 comments 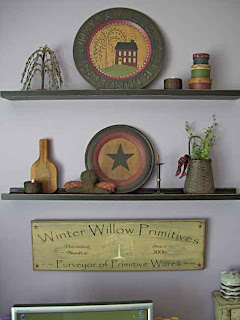 I'm afraid I don't have a "before" picture but for the longest time I have had these two shelves above my computer monitor and for the longest time I have had Beanie Babies lined up on both of them....yes, Beanie Babies! I used to collect them but over the past few years I've come to only buy the occassional bear....it was time for a change. Over the weekend I decided to prim up these shelves that I look at ALOT. They were a natural maple color so the first order of the day was to paint them black, sand, and stain....once they were back up on the wall the fun could begin!....but wait, these shelves are only about two and a half inches deep so that is quite limiting as to what I could put up there....ok so it was just going to be a bit of a challenge, that's all....well I played all day yesterday with different things, this is what I came up with and I like it! Both of those plates are available in my web shoppe as well as that cute little box stack and the cupboard angel. I love those plates and I love how the colors in the boxes look so well with the plate up top! I also like the way the cupboard angel looks with the star plate! I've had that sign for quite some time, had it custom made by a gal who sells signs and blocks on ebay. Oh and the wall color....it's a smokey lavender....which doesn't exactly scream primitive but lavender and sage are my two most favorite colors. I have lots of greens in my house so the study, where both husband and I have our desks, we painted a shade called Mountain Lilac back in 2002 and have never changed it because we both like it. So there ya have it....I know everyone loves seeing pics of others' homes and displays so I wanted to share the change!
Posted by Janet - underthewillow at 1:33 PM 9 comments

~ A Plug For My Primitive Shoppe ~ 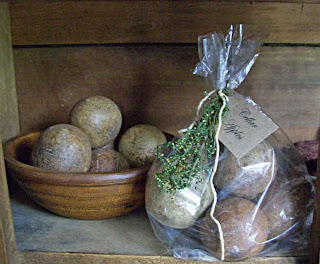 Good Morning blog buds!....I have been very busy adding New Wares to my web shoppe and thought I should post in case someone wanted to have a peek!....Happy Friday to all!
Posted by Janet - underthewillow at 10:41 AM 4 comments 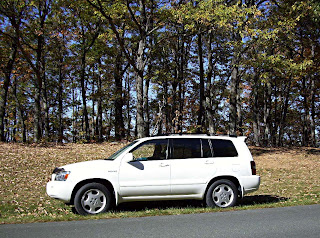 While I am sitting here waiting for my car to be serviced, I thought I would make a post about how much I hate having my car serviced!! First of all, the picture is of my car, I took that picture last Autumn while on a drive up the Blue Ridge Parkway. It's a 2006 Toyota Highlander, I bought it brand new 3 years ago this month. Previously I drove a 1990 Honda Accord that I bought brand new while pregnant with my now 19 yr. old baby and gave it to him to drive when he turned 16! He drove it for a year then bought a car on his own so then the Honda was passed to his big brother who needed a car and he's still driving it....truly a family car that ol' Honda!
Anyway, back to my current car....after driving an Accord for nearly 17 years, I wanted something a little different and went for the Highlander and I love it! Here in Virginia you are required to have your car inspected annually and have to display the current inspection sticker on your windshield....here's where my story gets ugly. The first time they put the sticker on they put it down so low that it was virtually impossible to remove the next time and when they did they left a bunch of goo all over those black dots that are down there on a windshield which bugged the crap outta me....I tried to clean the goo off myself but it was REALLY difficult, so the next year I told them to please be careful about placing the sticker....I even asked them if they could just give me the sticker to put on and they said no because a state certified inspector has to do it....ok so here's the really ugly part....last year when I picked up my car from being serviced and inspected, there were gouges and cut marks on the dash up there underneath where the sticker is placed, OMG!!....I freaked out!....I try to take REALLY good care of things so they are like new as long as possible so to have damage occur was beyond upsetting to me! Of course I complained and they told me that they could either have it repaired or give me a whole 'nother dash. So I went back with an appointment to consult with their interior repair specialist and he told me that the windshield would have to be removed for him to properly get to that area....I'm like, yeah right, I'm really gonna let you guys remove my windshield. My fear was that it would never be as good as new so I declined the repair and no way was I going to let them rip my dash apart so the damage is still there, it's not horrible, but it's there and it shouldn't be!! So here we are in May once again, time for another inspection which I am TOTALLY dreading and here I am holding my breath, waiting to see what condition my car will be returned to me in. I took it back to the same place, which is the dealer, because believe it or not, it's actually the best place around here to have it done!
Well there's my rant....it feels good to let it out....happy Friday everyone!
**UPDATE** so far so good, above mentioned vehicle has been returned with no further damage detected!
Posted by Janet - underthewillow at 11:18 AM 9 comments 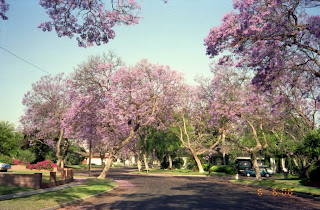 The street on which we spent our last 15 years in Southern California was lined with Jacaranda trees and this is how they looked in the spring. The lavender flowers were beautiful indeed but oh how messy they were! When they fell from the tree they would cover our driveway with sap and I remember when our boys were little they thought it was cool to run over the flowers with their trikes and bikes because the flowers would stick and build up all over their tires, LOL....seems not so long ago but my baby is turning 19 tomorrow so I guess it has been a fair amount of time....time does fly doesn't it?
Posted by Janet - underthewillow at 2:37 PM 9 comments
Newer Posts Older Posts Home
Subscribe to: Posts (Atom)
www.winterwillowprimitives.com

Janet - underthewillow
Hello!...I am the owner of Winter Willow Primitives, and I love finding unique Primitive Colonial home decorating wares for my customers!
I was born and raised in Southern California, and now reside in Virginia. I've been married for as long as I can remember, LOL and we have 2 grown boys. I love primitive colonial decorating, and will always be a Dale Earnhardt fan.

Live By The Golden Rule

Do Unto Others As You Would Have Others Do Unto You 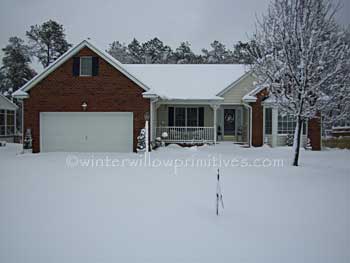 Missin' The Black No.3 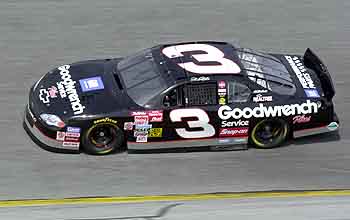 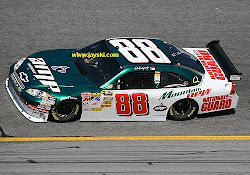 I know there are alot of free blog graphics out there but I have paid a graphics designer for this I Love Winter graphic so please do not take it, thanks!